In early 2020, I posted about a little experiment I was doing involving a stray sock in my hallway and the story went viral. Thousands of people followed along as the plot twisted and turned. No one could have predicted the surprise ending (least of all, me!). To this day, I still get messages about the sock saga LOL. 😂 Since it’s been awhile, I thought it’d be fun to share the story again for any newcomers that may have missed it…enjoy! 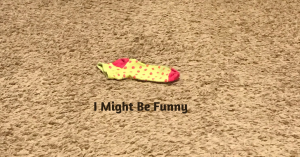 See this sock? It’s been in the middle of our upstairs hallway for about 48 hours now. It belongs to my 11-year-old. I don’t know where the other one is or how it got there.

As I bent down to pick it up, I had a thought. If I DIDN’T pick it up, how long exactly would it remain there?

I’m guessing that sock has been walked by at least 50 times already. Do they not see it? Do they just not care about a rogue sock in the middle of the hallway? The sock owner is leaving for college in six years, will she just leave it there and pack it up then?

I’M NOT PICKING UP THE SOCK. Instead, I’m doing a little social experiment. How long will the sock remain? Who will be the one to pick it up?

These are the possible players:

Anybody want to make a prediction? 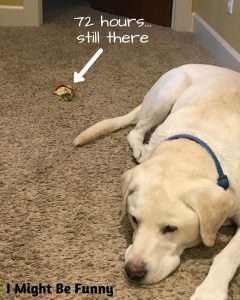 Apparently, all the world is so bored right now that thousands of people are wondering who is going to pick up this sock. I find this both hilarious and nerve-wracking. I mean, it’s a lot of pressure on a middle-aged mom.

So yesterday, my husband and I had a conversation in the hallway with the sock on the floor directly between us. I was on pins and needles as I kept waiting for him to look down but alas, he was unaware of the elephant in the room, and the sock remained untouched.

A couple of hours later, my 17-year-old was literally STANDING DIRECTLY ON THE SOCK while doing something on his phone. But apparently, it is not only INVISIBLE, it also cannot be FELT. Interesting. Perhaps this phenomenon can be of use to NASA.

The dog took a little nap on the sock and so it moved a couple of inches when he got up. So that was exciting.

With your amazing support, I am staying strong and resisting the overwhelming urge to pick it up and sling-shot it at my entire family.

Gotta go stress-eat some chocolate. Talk to you guys later. 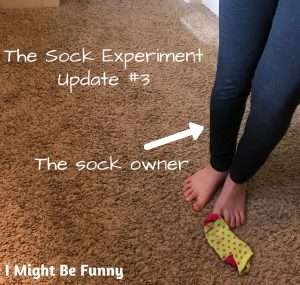 Greetings, sock watchers! Breaking news on the homefront. At approximately 7:10 p.m. I was at my desk (in a hallway alcove near the sock) about to write an update about how the poor sock had not moved an inch all day.

Just as I start typing, the 11-year-old owner of the sock walks down the hall to talk to me and steps on the sock. Next thing I know, she starts dancing around ON TOP of the sock. Just hoppin’ up and down RIGHT on it. And I’m DYING.

She then proceeds to PICK UP THE SOCK WITH HER FOOT and starts flinging it hacky sack style trying to catch it. Over and over. Suddenly our little sock friend was on its very own roller coaster! My phone was on my desk and I tried to very discreetly snap a photo. But then…

“Did you just take a photo of my FEET?”

“What? Oops…didn’t mean to hit that button, sorry!”

So as the sock continues to fly around, my clearly bored-out-of-her-mind daughter is pleading her case with me to adopt another dog.

And I’m thinking to myself: REALLY? Another DOG? Let’s see what happens with this SOCK first, kiddo.

Folks, I honestly thought “This is it, this is how it ends. She is now in POSSESSION of the sock.”

But alas, this is NOT how the sock saga ends. Because my sweet girl then flung that sock with her foot one last time (landing it quite close to its original spot actually) and danced her way back down the hallway.

It took all the strength I had not to yell after her, “ARE YOU KIDDING ME CHILD??!”

Because honestly? My money was TOTALLY on her, out of anyone, to pick up the sock.

In fact, the sock flinger has always been the MOST organized, responsible child. Her room is by far the neatest in our house. Seriously, it’s a little weird. A few months ago she watched an episode of Marie Kondo and proceeded to fold and color code every piece of clothing she owns. She’s ELEVEN. Did I mention she does NOT take after me?

So the sock flinging and dropping? VERY out of character. And maybe a little too OBVIOUS? Which then made me wonder, “Does she somehow KNOW? Am I being MESSED with? Is this like that episode of “Friends” – do they know that we know they know?”

The plot thickens. The sock remains. Stay well my friends, and tune in tomorrow for another update on “The Sock Experiment”.

FRIENDS!!! The sock is GONE. MYSTERIOUSLY gone. Poor lonely thing was there all day being ignored as usual. At one point, I was sitting there staring at the sock, (because this is how exciting my life is now, I stare at socks) and wondering if it would legit stay there until we packed up and downsized when all the kids moved out.

I was also thinking that if my mother came to visit, that sock wouldn’t last THREE SECONDS on the floor. “Why is there a SOCK in the middle of your hallway?” she would say in her thick New York accent, and immediately whisk the sock away into its proper place. Because my mama ain’t got no time for that.

Back to the sock. So I’m looking at the empty space in the hall that used to be the sock’s home and wondering what the heck I should do. Do I start asking family members about the sock?

I decided I would go and look for the sock first. And folks – I searched high. I searched low. I checked hampers, drawers, the washing machine. I checked the giant mismatched sock pile on top of the dryer that I will deal with “one of these days”. I checked the sock owner’s FEET. And I’m telling you this sock is NOWHERE to be found.

Which means there is only ONE explanation for this. THEY TOTALLY KNOW. They have to. There is no way that sock would just up and disappear otherwise. But NONE of them are on Facebook. So, how? Who tipped them off?

I’m only sure of one thing – it was NOT the dog. My good boy hasn’t touched a sock in 8 years. Not since “the sock incident” happened when he was 6 months old. One day I’ll tell you guys THAT story…it’s a doozy.

Anyway…I thought about confronting them. But they are not letting me KNOW they know. Which I’m thinking means maybe they have some sort of plan? They’re a pretty creative bunch, these people. Letting this play out might be a lot more interesting than confronting them.

But now I just realized that if they somehow see this post, they’ll know I KNOW they know. OMG my life has literally turned into an episode of a sitcom.

Whatever. It is what it is. I’ll be patient. I’ll give them a day before interrogations start. You hear that, family? You have one day to make a move before me and millions of people demand answers. Well, ok, maybe not MILLIONS. But still – a LOT.

***In OTHER mysterious news, my teenage son emptied all the trash cans WITHOUT ME ASKING. I swear, it’s like I’m living in some sort of alternate reality. 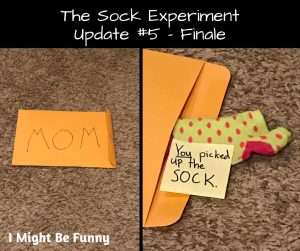 I KNEW I was busted! Apparently I live with a bunch of comedians. Or VERY bored children.

So all day yesterday…radio silence in my house. I was literally waiting for the sock to pop out at me from somewhere. I opened the fridge half expecting like, the soy sauce to be wearing the sock. Or to see it walking around on my husband’s size 13 foot. Which would actually be hilarious, come to think of it.

Anyway, when the sock didn’t appear, I started second guessing whether or not they actually knew. And that maybe my final update was going to end up being, “Hi folks, turns out you are all following some random crazy mom who simply can’t keep tabs on her family’s socks so y’all might want to re-think your life choices.”

BUT THEN IT HAPPENED. I went to bring some laundry into my daughter’s room and she and my son were in there talking. And they stopped talking when I walked in. A little TOO quickly.

And then I saw it. A tiny, almost imperceptible smirk on the little 11-year-old sock owner’s face that nobody but me, her mother, would have noticed. “GOTCHA!” I thought. But I bit my lip. Because now I knew they WERE plotting.

This morning I woke up to an envelope on the floor where the sock used to live. So of course I picked it up, and in doing so, I inadvertently PICKED UP THE SOCK I SWORE I WOULDN’T TOUCH, which was inside. Making all the predictions on social media that “The mom will end up picking up that sock” technically come true.

Also, I actually WAS correct in assuming they wouldn’t see the post on Facebook…it was Instagram that did me in! My 17-year-old found out and masterminded the kidnapping of our sock (I say “our” sock because I feel like this sock now belongs to this whole group). Clearly, quarantine is making us all crazy.

So that, my friends, concludes our week-long sock saga. I cannot express to you how much I’ve enjoyed you as my co-conspirators and how much I appreciate all of the wonderful comments, most of which were far funnier than anything I could have written.

And to my new followers: A big welcome to all of you, and I hope you stick around for more fun. I often find myself in awkward, embarrassing situations and I have no shame in sharing them with the world if it means putting a smile on someone’s face.

UPDATE 2021: The sock currently resides in a drawer, where, sadly, it is now too small for its owner. Nevertheless, it shall be kept as a reminder of its crazy ride in 2020!

***If you enjoy my posts, I invite you to follow my blog…you can sign up via email and once a month or so (if I can get my act together) I’ll send a little note with my top posts just for you!

Welcome! I'm Janene, the creator of I Might Be Funny. Read More…

I will miss it EVERY time. 😄🤷‍♀️ Espec

Swipe left ⬅️ for some of my favorites from @s

Right?? 😂 My kids know which parent to ask for

This trick could save some marriages. 😂 . (Twi

😂😂😂 So true. From the funny @thecatwhispr